The yearly Federal budget deficit is on everyone’s mind these days. Many use it to score political points, but with few exceptions, both political parties failed the American people in controlling the debt monster. Certainly the debt isn’t a new problem to this administration — remember SchoolHouse Rock from decades ago?

Currently the debt clock shows total Federal debt just short of $13 Trillion dollars. How much is that? It’s just a bit over $40,000 for every man, woman, and child in the United States (can your children pay that?). You have to pay that much more in taxes than you pay now, assuming the deficit spending stops immediately. Of course, Congress and the President are increasing the yearly deficit at unprecedented levels. 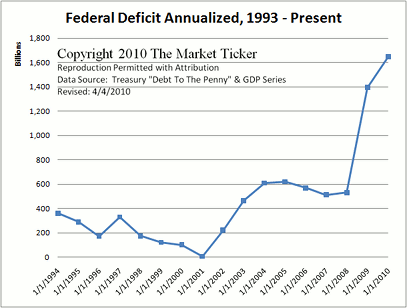 Remember deficit spending — whether by the government or yourself on a credit card — is a presumption on the future. It’s spending tomorrow’s money today, as Wimpy from Popeye noted “I’ll gladly pay you Tuesday for a hamburger today”. Of course, that money at some point must be paid, but deficit spending is the ultimate kick-the-can-down-the-road strategy by hoping the bill never comes due, or letting someone else pay it later.

Yet President Obama and the Congress have almost tripled the deficit in just two years (from just under $600 billion in 2008 to $1.4 Trillion and $1.6 Trillion in 2009 and 2010), projecting huge deficits far into the future. Obviously, that’s unsustainable. What to do? In spite of all the drivel coming from Washington, it’s really simple:

Unfortunately, neither Congress nor the President have any desire to reduce spending, and in fact are increasing it at unprecedented levels. So reducing spending is out. Raise taxes? Quite possible, but with the deficit increasing it will take huge tax increases to have an effect. How about inflating the currency? The world has seen this before, as countries print more money to pay off their debt. Of course, that’s massive inflation as well.

We haven’t even mentioned Social Security being broke, or other entitlements which make the problem much worse. Obviously the debt is serious stuff, and requires serious leadership to solve. Most people understand there’s no free lunch, but will someone please inform Washington? They don’t seem to understand, and haven’t for a looooong time — it’s so much fun spending other peoples money!

Chart Credit: The above chart comes from The Market Ticker.