The increasing Federal deficit rises to the top issue these days as the government seeks to increase the amount they spend on your credit card. The size of deficit spending in the Obama administration is truly breathtaking (and not in a good way). Unfortunately, they’ve been lying to you about the deficit for years, as far back as the myth of the surplus from the Clinton era.

Yet people call those pointing out the iceberg ahead fear-mongers (It’s the end of the World!). Is the situation really that bad, and how much worse has it gotten since 2008? A picture is worth a thousand words; consider these two charts from the St. Louis Federal Reserve and you’ll quickly understand just how much water the ship is taking on, while the President and Congress argue about the color of the carpet instead of plugging the hole.

You’ve heard about Quantitative Easing, which is just another name for printing money (inflation). In the real world it’s theft — reaching into your pocket and taking a part of your money through devaluation.

How much money has been printed recently, compared to history? 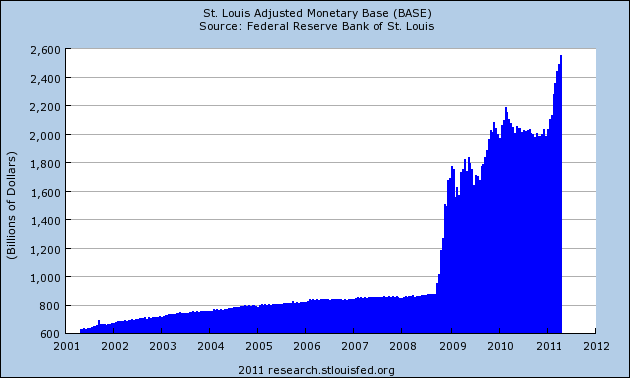 That’s certainly stunning, and shows how much they’ve printed to cover reckless spending and stimulus (exit question: are you better off now than 2 years ago?).

Remember, rising prices are not the cause of inflation, they’re the result. Inflation increases the amount of money in circulation, which makes each dollar less valuable, so you have to use more of them. It’s a Federal tax on your assets — without a vote — decreasing what you can purchase.

For example, suppose you had a Honus Wagner baseball card. There aren’t many around, which makes this particular card worth millions to collectors who want it. Now, suppose somewhere in the dark dusty recesses of the bubble gum factory a few boxes containing thousands of Honus Wagner cards suddenly appear in pristine condition.

How much would your card now be worth? Not very much, because more of them exist (they’ve been inflated, or quantitatively eased).

The money supply is no different. When the Fed prints money, it makes what you’ve got worth less, thus you need more dollars to buy what you used to. That’s inflation. The ugly truth of inflation remains stunningly simple: theft of what you’ve earned. It’s the same as if you’ve been robbed.

So how large of a disaster is the Federal budget? We heard all the noise about how reckless President Bush was — remember that as you consider the following graph: 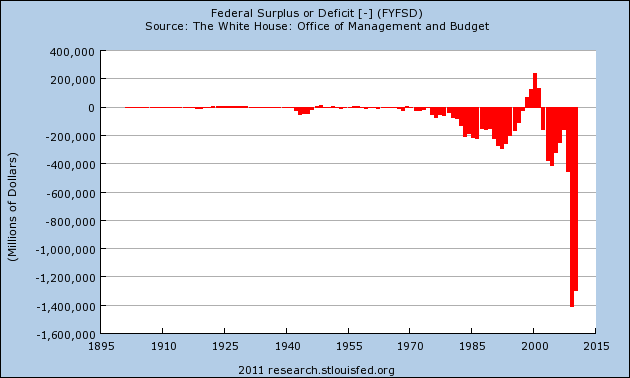 It’s more interesting to consider why Obama spends so recklessly — orders of magnitude worse than anything previously known on the planet. Worse, under proposals now thrown around in Washington, it may take decades to get back to the overspending levels known under President Bush (as Obama has tripled the deficit).

Could we be seeing the Cloward-Piven strategy before our eyes? What else could explain such irresponsible behavior of the administration? Will the crash and fireball be the result of incompetence, stupidity, denial — or could it be the deliberate and planned outcome?

It’s past time to ask why the last few years have been such a train wreck. If any hope exists of turning it around we can’t get hung up on talk of $30 billion vs $60 billion in spending reductions, no, we need to be in the range of $500 billion to $1,200 billion per year in spending reductions. Spending may go up 20%, and then they act like you’re cutting their throat for a puny 0.01% reduction.

Only after a balanced budget exists can we begin to pay off the $14 Trillion in debt (or about $50,000 for every man, woman, and child in the country), and that assumes the reckless spending stops immediately (they don’t call ’em tax-and-spend for nothing).

So while the ship takes on water, the idiots in Washington argue over what color carpet to put in the lounge. The bow of the ship has already slipped beneath the waves, as the band plays on…

We need new leadership, fast — people who understand the scope of the problem, and will offer real solutions. Unfortunately, anyone brave enough to admit to reality and propose solutions becomes savagely attacked for political advantage, while the doomsday date becomes closer and closer.