The best Bible you can have is a 1967 Scofield Bible for all the reasons I’ve discussed in my primer on Bible Translation. It’s Textus-Receptus based, ignoring the corrupt Westcott-Hort (also known as UBS or Nestle-Aland) text. Sadly, it seems to go in and out of print, so what should a discerning Bible student use?

The 1967 makes word changes directly in the text, making it quite easy to read, while clarifying words with changed meaning since 1611. It’s easiest to show this with an example, using 1 Thessalonians 4:15. First, the 1967 Scofield: 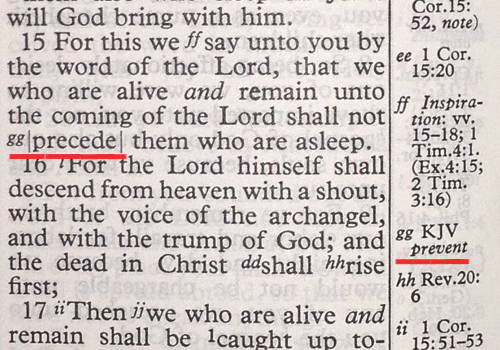 The Greek for precede (φθάνω phthanō) means come before. Notice vertical bars around precede notify you of a language change (with the original word in the margin) — prevent has been changed to precede, which is accurate.

But notice the way it appears in the Scofield III: 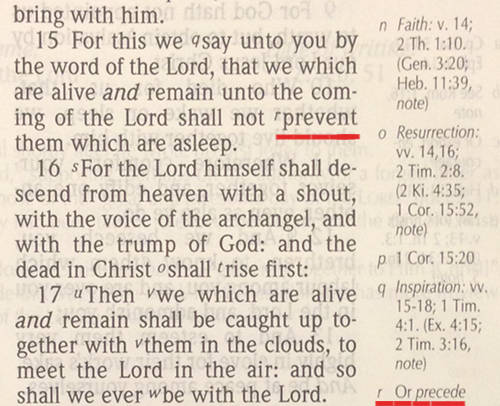 The 1967 and the Scofield III are reverse — the 1967 makes word changes in the text, while the current Scofield III has them in the margins.

For those unfamiliar with Olde English, the 1967 is easier to understand, which is why it’s my primary reading and teaching Bible.

When it’s unavailable, the Scofield III is the next best, and far superior to the alphabet soup of the modern, corrupt, translations all based on the Alexandrian Westcott-Hort base (also known as UBS or Nestle-Aland).

If you don’t like the KJV, get a good New King James Bible (NKJV) and it’s almost as good as the KJV. KJV-Only purists won’t be happy, but people on both extremes are never happy with my stance on Bible Translations.

The best Bible you can have, in order of most preferred to least:

The first four are nearly equal, while the NASB falls off a bit as it uses some of Westcott-Hort’s perversions of the text, but doesn’t follow all of them as other recent translations do — compare Matthew 18:11 in the NIV, KJV, and NASB, for example.

Please remember notes appearing in your Bible are not inspired by God, they’re no better than any other commentary you might pick up. Many times a note appears at the end of Mark claiming the last few verses don’t appear in some manuscripts (the corrupt ones). Just ignore it.

The Scofield KJV Bibles aren’t the best because of the study notes, they’re the best due to the Bible text itself. I’ve had people complain about some of the notes in Scofields, and do not recommend it because of notes, rather it’s the KJV text and how it’s handled.

For some strange reason, the publisher doesn’t keep the 1967 Scofield in print, in spite of demand — I’ve seen them offered for over $300 on Amazon. I’ve asked for a reason from the publisher, but have never received a response.

When the 1967 Scofield KJV is in print, it’s the best choice, and remains the best KJV Bible.

When unavailable, the Scofield III KJV is the next best thing.