“That’s going to leave a mark”

Not the first time I’ve thought those words. Probably not the last.

The pain wasn’t too bad, my first thought was crap, this will make Saturday’s Taekwondo tournament a whole lotta fun — I hope it’s not too stiff by then. 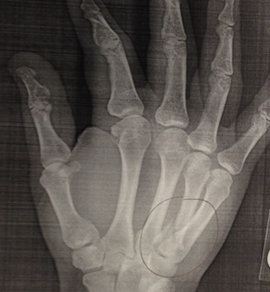 As the swelling increased, so did the language — to other four letter words which aren’t family-friendly. I soon realized the chances of competing Saturday decreased rapidly with time.

Down to the ER (our family has the ER club card — after nine visits the tenth is free), and X-rays revealed a bone (fourth metacarpal) in multiple pieces.

Normally the family treks to the ER together (Rule 1: the family sticks together), but I was confident this was a waste of time; I only went to prove I was fine. Rub some dirt on it, and keep going.

The doc tossed the picture on the bed as if it was the jack of spades trumping my ace.

The nurse soon arrives, and fashions a temporary brace. I sat waiting the docs final instructions.

I asked the doc about removing the brace. Sure, he said, just be careful. A loophole! Careful means spinning the bo staff a bit slower than normal. I’m in!

Like Abraham haggling with God over Sodom in Genesis 18, I upped the ante — what if I competed Saturday? I can take the pain…

Negative. He began talking about bones pushing through skin, and after that I really didn’t hear much.

I lost that round as well.

On the way home I popped in an 8-track of “Allison Long’s Greatest Hits” and by the time I got home I felt … crappy.

I was devastated. I’m at a loss for words to describe it, so I’ll let someone else say it.

Why are you doing this to us? You promised you would never, ever give me more than I can handle, yet here I am Lord. I am broken, I am depressed, I want to die, God. Why didn’t you just let me die when I had the chance? I can’t do this anymore.

I thought of fibbing a bit and saying the doc said I could compete if I could take the pain — yet another reason not to break rule number one.

Competing with Junior that day would be one of my all time life-highlights — and just about the last item on my bucket list.

I let him down, and couldn’t stand it. 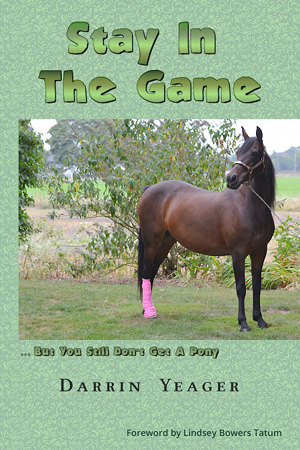 Besides that, I didn’t want to go through the hell of a cast, left handed eating, not tying my own shoes, and more. I’ve been down that road before, and once frankly was enough.

Double-crap sandwich with a side of self-pity. To say I was crabby would be an understatement.

Pastor Chuck Smith once said when he’d stand at the back of the church after service people would tell him his message was just for them. He would privately think, no, that was for me.

I’m no different — we all need reminders of the same things:

When going through tough times, many think they can’t make it, God abandoned them, and they’re all alone.

It’s not just you, we all have those feelings.

Then a friend walks by. “Hey Joe, it’s me, can you help me out?” And the friend jumps in the hole. Our guy says, “Are you stupid? Now we’re both down here.” The friend says, “Yeah, but I’ve been down here before, and I know the way out.”

We need to help each other out of the hole.

I’m just a regular graying-hair old guy. If I can do it, you can too. I don’t have a cape. I didn’t write the New Testament like Paul. I’m no superhero.

But I do know one simple truth: never quit, never give in, never surrender. Remove those phrases from your vocabulary.

You don’t drown by falling in water, you drown by not getting up.

Don’t think I’ll try and see how it goes. That’s a setup for failure.

Step up to the plate. Get in the game. Get off the bench. Dare to try great things; fail sometimes you will. Much hassle, there is. Laughed at, for sure.

Be the man in the arena while others sit it out.

It is not the critic who counts; not the man who points out how the strong man stumbles, or where the doer of deeds could have done them better. The credit belongs to the man who is actually in the arena, whose face is marred by dust and sweat and blood; who strives valiantly; who errs, who comes short again and again, because there is no effort without error and shortcoming; but who does actually strive to do the deeds; who knows great enthusiasms, the great devotions; who spends himself in a worthy cause; who at the best knows in the end the triumph of high achievement, and who at the worst, if he fails, at least fails while daring greatly, so that his place shall never be with those cold and timid souls who neither know victory nor defeat. (Theodore Roosevelt 23 April, 1910)

… or a fourth metacarpal in a single piece.