The first equipment piece required is the belt of truth; other armor attaches to its foundation. We must never underestimate the belt’s importance, and thus, truth.

We come to the strange phrase “gird your loins” we don’t hear much today. When wearing loose fitting clothing, before performing any strenuous activity you should tie your clothes around your waist to avoid tripping — to gird your loins meant to be prepared for movement and action.

If you’re to be ready for combat, preparation begins with truth.

What is truth? Philosophers struggled with this question for thousands of years. Even Pilate asked, “What is truth?” (John 18:38).

It might shock you (or maybe not) to discover you’re being lied to constantly (and we’re not just talking about the abs-zoom 2000). For example, perhaps you heard about the famous Clinton budget surplus when the government actually had money left over at the end of the year!

The myth of the surplus continues as both political parties are vested in continuing the deception. Republicans say, see what happens when we control Congress? Balanced budget! Democrats point to the president — Bill Clinton.

Both political parties are lying. Each year during Clinton’s presidency the country went more in debt — a fact easily provable by the US Treasury’s “debt to the penny” web site (you know, the guys actually in charge of the debt). 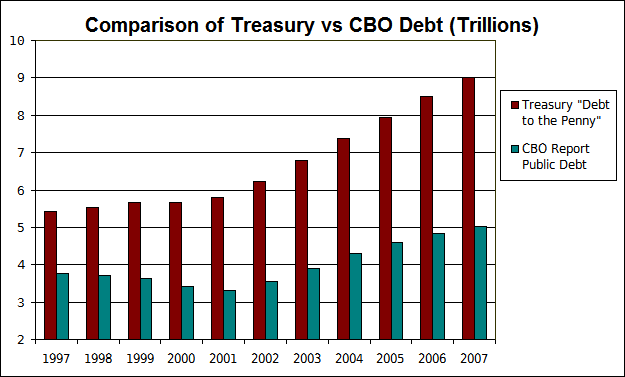 The red is what the debt actually is, the blue-green is what they say it is.

Yes, they’ve been lying to you all along. If you don’t believe me (and you should do your own homework), read our article Myth of the Surplus and its companion articles on truth-lies and discover the truth for yourself.

As the world strains to find truth among piles of doggie poo-poo, for the Christian it’s easy — God gives us truth in the Bible. We have the complete revelation of truth in Jesus Christ, and the entire Bible speaks of Him (John 5:39).

While we have a complete revelation of truth, remember truth is our most precious asset. Truth is not relative, truth is absolute.

Mishandling truth affects the church as well, as some popular (but very wrong) ideas infect the church.

As we head to the age of apostasy, finding — and then guarding — truth becomes vital, and is step one in becoming combat-ready.

The Christian soldier must remember that while he has truth, the world in general does not. The world does not see truth as absolute. The theme for today is “Don’t confuse me with facts, my mind is made up!”

Naturally, if you’re to become skilled in truth, you must train and work, as General Paul told Timothy:

Study to show thyself approved unto God, a workman that needeth not to be ashamed, rightly dividing the word of truth. (2 Timothy 2:15)

Rightly dividing in Greek is ὀρθοτομέω (orthotomeō), meaning straight, precise, and sharp. It means take the Bible as it says, don’t “modernize” or allegorize it. Those modernizing the Bible (social justice, liberal theology, post-modernism, etc) are not rightly dividing God’s Word.

Being combat-ready isn’t part-time entertainment, it’s a way of life.