The average pew-warmer in church is un-trained, un-prepared, and unable to perform their combat role, providing little more usefulness than zombie food. 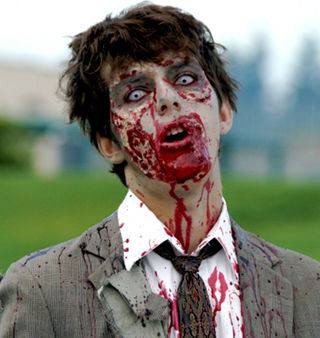 Photo courtesy of Daniel Hollister.
CC BY 3.0 US

The reason remains simple: they listen to their pastor too much.

I don’t mean you should stop attending church or heckle your pastor during the message (I certainly don’t want either when I speak), but you should (must?) stop relying on your pastor as your primary source of knowledge.

When faced with a herd of zombies, survivors have training for the zombie apocalypse. The unprepared and those who panic are zombie food.

Too many Christians sit around waiting for Sunday’s spoon-feeding, so when crisis arises at 3AM they discover they’re woefully unprepared, and their only recourse is to phone for a lifeline.

Zombies don’t wait to see if your friend answers the phone — you’re food for zombies if you can’t defend yourself. Period.

And it’s ugly. As in slaughtered like a pig ugly. Because at 3AM you’ve got what you’ve got, whether you’re facing zombies or your largest spiritual attack. No difference exists.

Do you want to be the pig or Chuck Norris kicking some zombie butt? It’s your choice.

Becoming a black-belt like Chuck Norris takes hard work, dedication, and a commitment to never give up. After all, zombies may be slow, but they’re persistent.

You’ll have to work, sweat, and study. It’s not for the faint of heart. It’s not for couch potatoes. But you’re not in that group, are you?

While zombies might be fictional, certainly other things that go bump in the night exist. Sadly, too many Christians place those things in the same fictional category as zombies.

I assure you they’re not.

Whether you believe such things exist or not fails to change the reality of their existence. The difference between sticking your fingers in your ears saying “la-la-la, I can’t see you” and being Chuck Norris is one tends to survive.

Because you will have those 3AM moments, and you’ve got what you’ve got.

Are you ready to engage? Christianity is a full-contact activity. If you’re not ready, if you deny such things exist, if you don’t want to engage and rescue others, save yourself some time and don’t bother reading further.

Go back to the couch, grab the remote, and hope Chuck Norris and friends will be around when you need them.

When the Jews returned to Jerusalem under Zechariah and Nehemiah, only a small number of people returned. About 3%. What can 3% do?

In the American Revolution, only about 3% actually engaged in the battle. In some conflicts, people divide into three groups:

Remember the Jews after leaving Egypt? Oh, you brought us out here to die! Oh, that we were back in Egypt with the leeks and onions! Moses, what are you doing to us?

A sizable group wanted to return to the bondage and slavery they escaped from — definitely in the zombie-food category.

The 3-percenters saved them from that fate — the zombie fighters.

Remember, you don’t need a large group to change the course of a nation. Only 3%. The people and entities aligned against you know that as well, and be assured they’re plotting with their own 3%.

What If The Door Slams Shut?

You should not stop attending church, nor should you ignore your pastor or other teachers. However, you should attain a combat-level of spiritual fitness, which never comes from spoon-feeding.

You must work out. Hard.

Real life doesn’t exist the way TV preachers talk — come to Jeeeeeesus and life will be rosy. Life is hard, and the truth is you may not get a Lexus, an ice cream, or a pony.

To survive you must flip your primary and secondary sources. Your own study and preparedness becomes primary, while your pastor becomes one of your resources to learn from.

But the goal is always to be combat-fit on your own. At 3AM when crisis comes (and it will), you might not be able to reach someone to bail you out — yes, that means you’re zombie-food again.

All over the world Christians are persecuted for their faith. If you’re tossed in jail, would your knowledge and skills cause you to die, survive, or thrive? Could you lead others as Paul did in prison?

If not, you’re not combat-ready, you’re the pig waiting for the slaughter (or zombie-food, take your choice — either way it ain’t pretty).

Fortunately, time still remains for training, at least in the USA. For the most part, we’re free to openly worship and assemble as Christians. We must use the time remaining to ensure each and every Christian possesses the ability to function on their own.

Sadly, the church fails its primary mission: preparing the saints for battle.

As the rest of the world shows, it’s only a matter of time before the ability to meet on Sunday (and what can be said) will be restricted. It happens elsewhere, why would you think it can’t happen here?

Once that happens, your combat status will be decided — you’ll have what you have.

The Christian life is not a love-fest with everyone sitting around singing Kum-by-Ya and eating s’mores. It’s not creating heaven on earth. Far from it.

It’s a battle. And hard. If it was easy, would not our churches overflow every Sunday?

If you’re untrained right now, panic thou not. Time still exists to make the journey from white-belt to black-belt zombie slayer, but you must begin now.

Where to begin? Start with these five steps.

Get through those, and you’ve already passed beyond white-belt. Good job!

Need any help? Let us know, that’s why we’re here — to get you to a combat-ready black-belt. We all have bad days. You can be ready for them … or not.

You should not stop listening to your pastor, but you should study for yourself. Your pastor is simply another resource you can (and should) use, but he’s not your personal body-guard.

Because 3AM is coming, and you’re either going to fight like Chuck Norris or be slaughtered for zombie-food.

You have no other options to choose from.

Bonus content! Do you want to know what happens at 3AM? Sign-up and receive a special article “Animal Magnetism” which actually was written at 3AM. If you’re already signed-up, go to the member area and grab your copy.