We normally don’t discuss politics for politics sake. However, when the majority of people—of all political stripes—are hugely unhappy with Washington, it’s time to peel back the curtain and reveal why Washington is so broken, and why it fails to solve anything, only making situations worse. How did we get to the point when government is dysfunctional?

Reading the far-left’s comments about the retirement of Max Baucus (D-Montana) has been interesting. The anger spewed towards him from the left has been fascinating.

1. In the Beginning There Was … Gerrymandering

Gerrymandering involves creating election districts favoring one party over the other.

The object is to pack your opponents party into a few massively favorable districts (like 75/25 or more), and give your party many more districts with favorable—but smaller—ratios (like 60/40). The resulting districts look like strange creatures; for example, Illinois District 4: 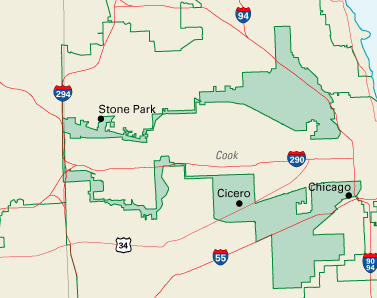 As taught in political-science class: the fair apportioning of voters is called “districting,” while unfair is called “Gerrymandering.” Naturally, the favorable party thinks it’s fair, while the other cries foul.

Two things happen via this strategy:

The political parties have become so good at this strategy, it leads to the next problem.

The first because if you’re a “D” voting in an “R” district, you don’t get to vote in the primary for the “R” candidates, but since it’s a safe district, the winning party is already known. Whoever wins the primary wins the general.

This also affects national elections: If you’re a voter in California, Texas, or New York, those outcomes are already decided — the parties could run Mickey Mouse versus Einstein and the mouse would win (some would say the parties have already run Mickey Mouse and he won, but we digress).

Nancy Pelosi in San Francisco has nothing to fear from moderate candidates (or candidates of the other party), as her district has been programmed to elect radical Democrats. In fact, Pelosi benefits the more extreme positions she takes, as her only realistic challenge would come in a primary from someone more extreme than she (i.e. farther left).

The result? Compromise and civilized discourse tossed out the window.

3. You Vote for Party Leaders, not Candidates

What your Congress critter says is 100 percent irrelevant. If you vote “D”, listen to Pelosi — that’s what you’re voting for (and similarly on the other side).

This has played out on everything from the Patriot act to Obamacare as the last few years has seen the normal process for a bill subverted. Now, the new norm is back-room deals cut by the leadership, with few rank-and-file members having any input at all until the bill is thrown onto the floor for a vote. As one Senator said in 2007:

It happened with the Patriot act, Obamacare, and others. When those bills got to the floor, votes were rushed with no time to actually examine and read the bills; members of Congress are arm-twisted into voting whatever the party leadership says.

Only later does the public discover what a stinking, festering, pile of doggy doo-doo the bill actually was (is).

During the recent Democrat party attempt at gun-control, the truth came out:

“Bribery isn’t what it once was,” said an official with one of the major gun-control groups. “The government has no money. Once upon a time you would throw somebody a post office or a research facility in times like this. Frankly, there’s not a lot of leverage.”

Remember, it’s not how much you get that determines whether it’s ethical or not, but considering the offer. When people defend they got $300 Million for their pet group, we’re supposed to be relieved by the amount they sold their soul for, instead of 30 pieces of silver?

The end result remains the same as Judas: they sold their soul. Perhaps those bribed Congressmen should read Psalm 15.

The fallout over the sequester you may or may not agree with. However, one thing every sane person will agree with — when the administration says to make the cuts painful, that’s a sign Washington simply does not care about citizens.

Keep in mind, there are no budget cuts — only reductions to requested increases. In the alternate universe of politics, if a budget was $100 Million, and next year they ask for $150 Million, but receive $120 Million, they consider that a “cut” of $30 Million, not an increase of 20%.

Be assured, the government will spend more this year than last as each debt deal leads to disaster; budget cuts are second only to the myth of the surplus in false ideas claimed as true.

Some people choose to believe the lie, others do their homework and discover the deception.

Voters exist only to be manipulated to voting to return those in power yet again. The aptly named “LIV” or Low Information Voter believes whatever garbage is tossed their way (like budget cuts actually exist, the so-called Clinton surplus existed, Social Security is funded, and so on). Of course, the failure of public education creates people who can’t think logically as schools use whatever trendy technique exists, rather than what works — my child is not a social experiment.

There you have it, 5 reasons why Washington remains broken.

Want to fix it? Good luck. As the country turns away more and more from ethics and morals — even for people in the highest elected offices — it’s no surprise those values permeate society. A return to old-fashioned God-given morals and people holding leaders accountable for their lies will always be step one in turning the country away from corruption.